The pure-tone hearing threshold - the lowest sound intensity that a person can perceive - is usually estimated from responses to stimuli at a set of standard frequencies. At each frequency, a staircase ‘up 5 dB - down 10 dB’ approach is used to incrementally estimate the threshold level. This simple approach however suffers from a number of drawbacks:

This project aims to address these problems by taking a probabilistic approach to the pure-tone hearing threshold estimation problem.

This results in a “Bayesian pure-tone audiometry” method illustrated by the figure below.

The Bayesian pure-tone audiometry method incrementally decreases the uncertainty about the users hearing threshold curve by repeating the following steps:

These steps are repeated until the uncertainty about the hearing threshold is sufficiently small. The fully probabilistic treatment of the estimation problem has some favourable properties:

To demonstrate the method, we performed simulations in which we try to estimate an artifical hearing threshold curve. The figure below depics an example of the resulting ‘probabilistic’ audiograms after 7, 14, and 21 trials: 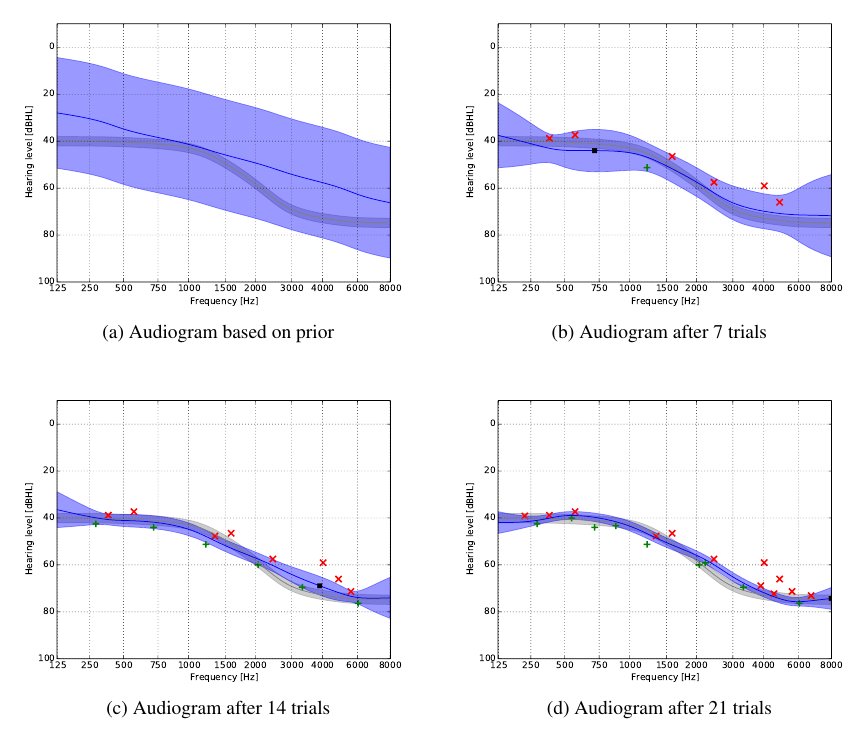 The grey curve depics the ’true’ hearing threshold curve and the grey area covers 2 standard deviations of the user’s response noise. The green plusses and red crosses represent test tones that were labelled as either audible (green) or non-audible (red). The blue line is the HT estimate based on the data so far, and the blue area depics 2 standard deviations of the estimate uncertainty. The rate of convergence obviously depends on the amount of noise in the response model. However, the method is robust in the sense that if the response model is sufficiently accurate, it will converge to the true hearing threshold curve in a minimum number of steps.

More details on this project are available in the following papers: